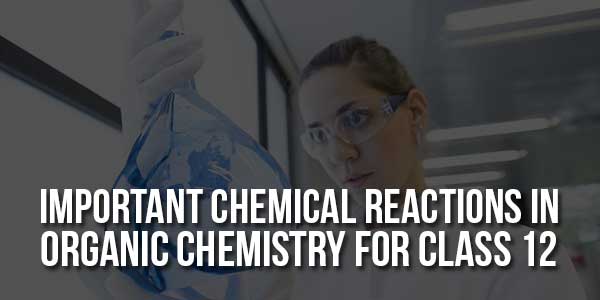 Like any other subject, Chemistry includes several divisions. One of these divisions is organic chemistry. Organic chemistry is the category of chemistry in which we study reactions, structures, compositions, properties, and preparation of carbon-containing compounds

What is Organic Chemistry?

These include hydrocarbons, buts compounds with different elements like nitrogen, oxygen, halogens, phosphorous, silicon, and stuff.

As time passed, Organic Chemistry branched out, and now it includes the study of manmade products like plastics. Several human-made products like food, pharmaceuticals, explosives, and petrochemicals from cosmetics and paints.

Let’s know about the Class 12 Reactions in Organic Chemistry in this article.

The word organic is used because, initially, organic chemistry was limited to compounds produced by biotic creatures only. It was credited to too few of the vital forces found in organic materials because they consist of substances the other present inanimate substances lack.

This theory was found by Urey Miller. He debunked it when he synthesised urea from inorganic substances, but the classification is still in use.

Recommended For You:
Career Option After Technical Writing Course

Organic chemistry is massive in overall science because the major key property is shown cased by the element carbon, which is termed as carbon catenation. Carbon has the brilliant ability to create a very stable bond with other carbon atoms while giving it the ability to form stable molecules which have a relatively complex structure.

Inorganic chemistry, the reactions occur due to the making of bonds and breaking of bonds. In chemistry, a bond holds all the atoms together. A bond can cleave (split) in two ways. They are Homolytic Cleavage and Heterolytic cleavage.

What Is Homolytic Cleavage?

When covalent bonds between any two elements break so that each of the elements gets its electrons, it is called homolytic cleavage. Which means each electron gets its element. This process results in the formation of free radicals.

When the covalent bonds between two elements break unequally that is heterolytic; a charged species is formed. This kind of bond braking, where electrons are divided unevenly, is termed Heterolytic cleavage. 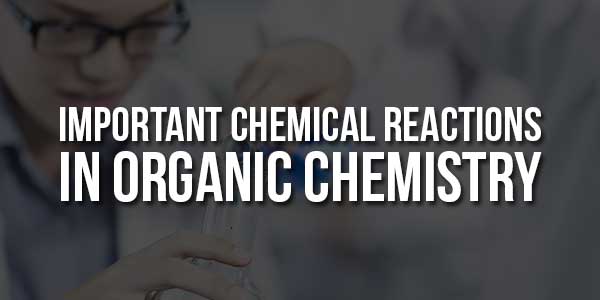 Intermediates are commonly defined as the first output of a consecutive reaction. The reactions that take place in this branch of chemistry take place.

Types Of Reactions In Organic Chemistry:

Inorganic chemistry, organic reactions are the reactions that happen between two organic compounds. These reactions are divided into six different types. All of them are listed below:

In the above state, R – X is the substrate (which means it is a chemical reagent that plays a role in the chemical reaction and on this an enzyme will act upon), Y is a reagent which means it can be a nucleophile or an electrophilic. On the other hand, X is termed as the leaving group.

Recommended For You:
Top 5 Tips Choose A Right MBA College

These are further classified into E1, E2, and E1CB. The different types of Elimination are Oxidation and reduction reactions, Pericyclic reactions, and Molecular rearrangements.

The spices which are reactive and neutral, which include six electrons in the outer shell made of carbon which makes them electron-deficient, are commonly known as Carbenes. Carbenes are species that have two odd electrons. We can further classify carbenes based on their spin states.

In this Carbene, both the electrons are found in different orbitals, and they possess the same spin.

There are several reactions in organic chemistry class 12 that are important. Some of the specific name reactions are listed below:

Recommended For You:
Overview Of The US CPA Exams - What Is US CPA?

The Br, CN, and CI nucleophiles will easily be formed in the benzene ring of benzene diazonium salt when Cu(I) ion is present. This organic reaction is termed the Sandmeyer reaction.

Bromine or Chlorine is produced in the benzene ring by curing the benzene diazonium salt solution with corresponding halogen acid when the copper powder is present. This reaction is termed as Gatterman reaction.

We prepare Alkyl iodides by the reaction of alkyl chlorides or bromides with NaI. This reaction takes place in dry acetone. This happens by the Finkelestine reaction.

On heating an alkyl chloride or bromide when metallic fluorides such as AgF, CoF2, Hg2F2, or SbF3 alkyl fluorides. This is called the Swarts reaction.

Alkyl halide reacts with sodium in dry ether to produce hydrocarbons that contain double the number of carbon atoms present in the halide. This reaction is termed the Wurtz reaction.

If you have understood the reaction’s concept and aim, you can further explain or elaborate on the given reaction. Understanding the concept will easily get all the marks are inside your pockets.

Comments RSS Feed
Next Article Learn About The Formula, Example And Derivation Of Electric Field Due To Point ChargePrev Article How To Make Use Of RS Aggarwal To Do Well In Maths?

4 Tips That Can Drastically Improve Your Website’s User Experience 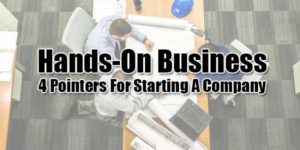 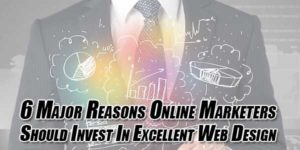